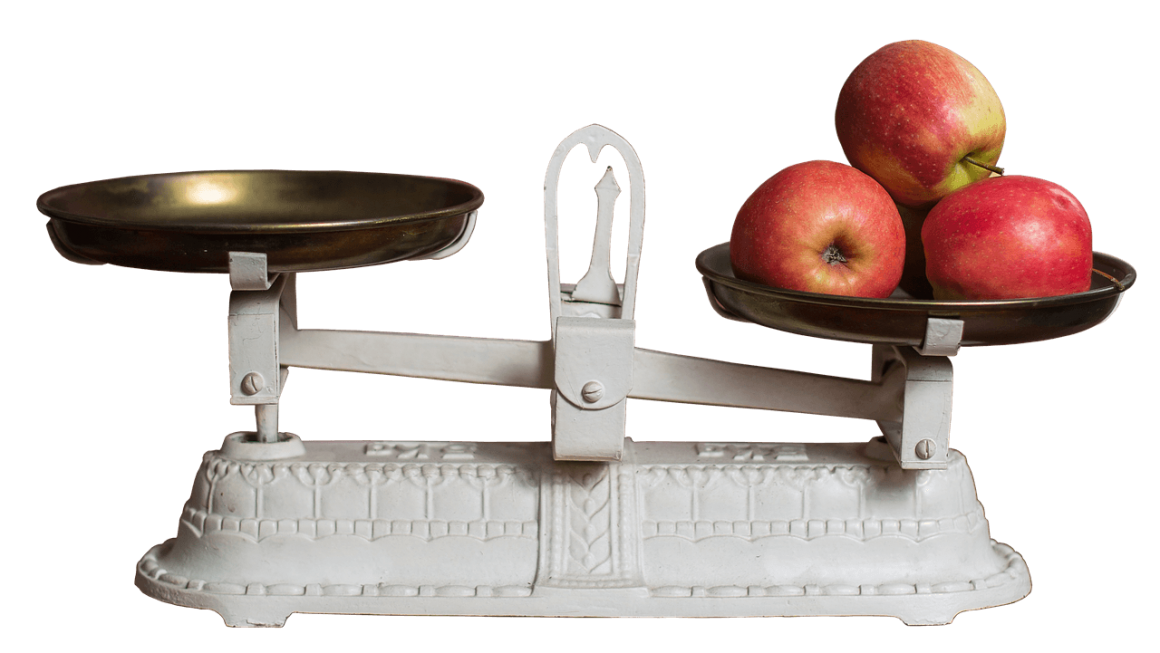 The normalization of eating disorders advances non-stop. There are still directly pro ana and pro mia (anorexia and bulimia) websites, that shamelessly affirm that the important thing is to be thin, not healthy. These are a minority. However, websites and social media accounts with thousands and millions of followers do something worse: they promote the exact same things, but with the aggravation that they hide them behind a façade of health.

To start with, almost every health website takes for granted that the objective is always to lose weight. It’s true that being obese is a more common problem than being underweight, and I think it’s good that there are more resources oriented towards people who suffer it. The bad thing is that many times this orientation isn’t specified, but the advice is given speaking in general, as if it was for everyone. In this way, they instill the idea that less weight = more health, less calories = more health, more exercise = more health.

I get furious when I see those images that abound on instagram in which two perfectly healthy meals are labelled one with a green tick and the other with a big red x, just because one has more calories than the other. Something like this: 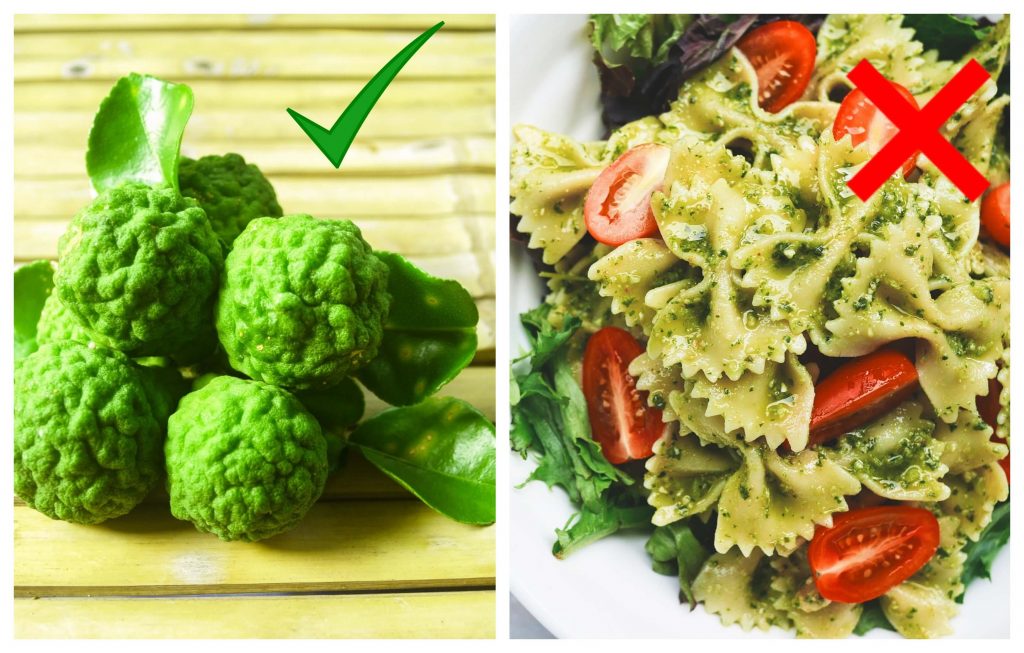 This is closely related to the classification of foods as good and bad. In the worst-case scenario, this classification will be based on the amount of calories it has. For example: pasta = bad, zucchini = good; so eat zucchini noodles! They taste phenomenal, but they’re just not the same. And both are good and have a place in a healthy diet.

But there are more subtle ways to do this. For example, real food vs processed food. It’s clear that we have to fight agains the massive consumption of ultra-processed foods, pay attention to the ingredients of the products we buy, etc. I’m greatly in favor of all that. However, there are two unsolved debates.

The first one is: where’s the limit between real and processed? Because there are real food talibans —and they’re not 2 o 3— for whom “good processed foods” is an oxymoron: for example, anything made with flour wouldn’t have a place, or anything with even the most innocuos of the additives. In this way, they create a distorted, anti-scientific and anti-historical view. The worst of the worst are those who mix processed with GMOs (that save lives and whose modifications aren’t more aggressive than the ones farmers have been making for thousands of years).

The second one is: up to which point is it necessary to cross out those foods with a red x? It’s equivalent to put a scarlet letter on the person who eats them. And then it becomes, as in the subject of calories, a moral matter. And an eating disorder is, before an appearance issue, a moral issue. The people who suffer it feel they’re “good” when they obey its rules and “bad” when they break them —that’s why they have to punish themselves if they do—. When this way of talking becomes generalized in society, their beliefs are reinforced.

It would be enough if we just substituted moral adjectives with nutritional ones. A given food isn’t red-forbidden, but more caloric, with a lower nutritional quality, high in sugar or fat, etc. Therefore, maybe they’re “orange”, meaning they have less room in a healthy diet than others. Although I believe that, when speaking in general, this can only be applied to things like certain additives and trans fats; for everything else, it depends completely on each person and their circumstances. 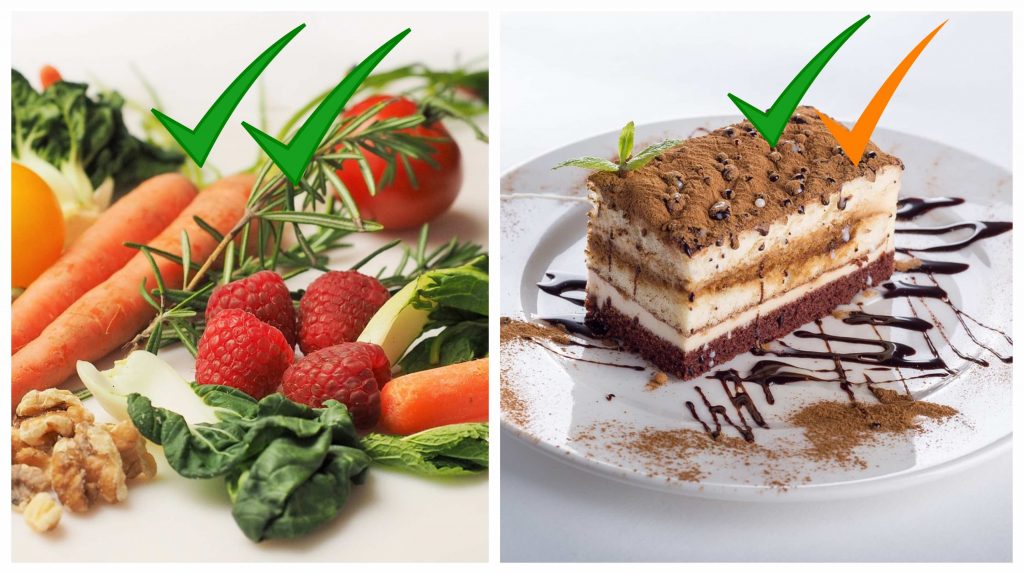 In short, everyday language is now riddled with expressions like these: forbidden foods, bad foods, fear foods, fattening foods, “cheat” foods. At this rate, the anorexia/orthorexia devil is going to lose his job, since there’s little more for him to insinuate to the victim.

This brings me to next point. “The” healthy diet doesn’t exist. We’re living in a moment where, together with the traditional fad diets, that despite their bad reputation are widely spread in practice, some lifestyle-diets have consolidated: paleo, keto(genic), LCHF (low carb high fat), LFHC (low fat high carb), vegetarian/vegan (I’m not talking about those who adopt it because of their beliefs), gluten-free, intermittent fasting, etc. I have no problem with their existence. What’s more, I think it’s great that they show there are options to choose from beyond the rigid food pyramid we’ve been raised with, which isn’t but another pretension of an one-size-fits-all.

The bad thing is that, instead of providing plurality, they try to fight for supremacy. The become pseudo-religions, ignoring the fact that in the nutrition field there are few absolute truths. A healthy diet is going to mean something very different for each person because every body is different (age, height, genetics, microbiota, possible illnesses or intolerances, metabolism, all of them interrelated and a long etcetera), and every lifestyle is too (personal likings are important!). 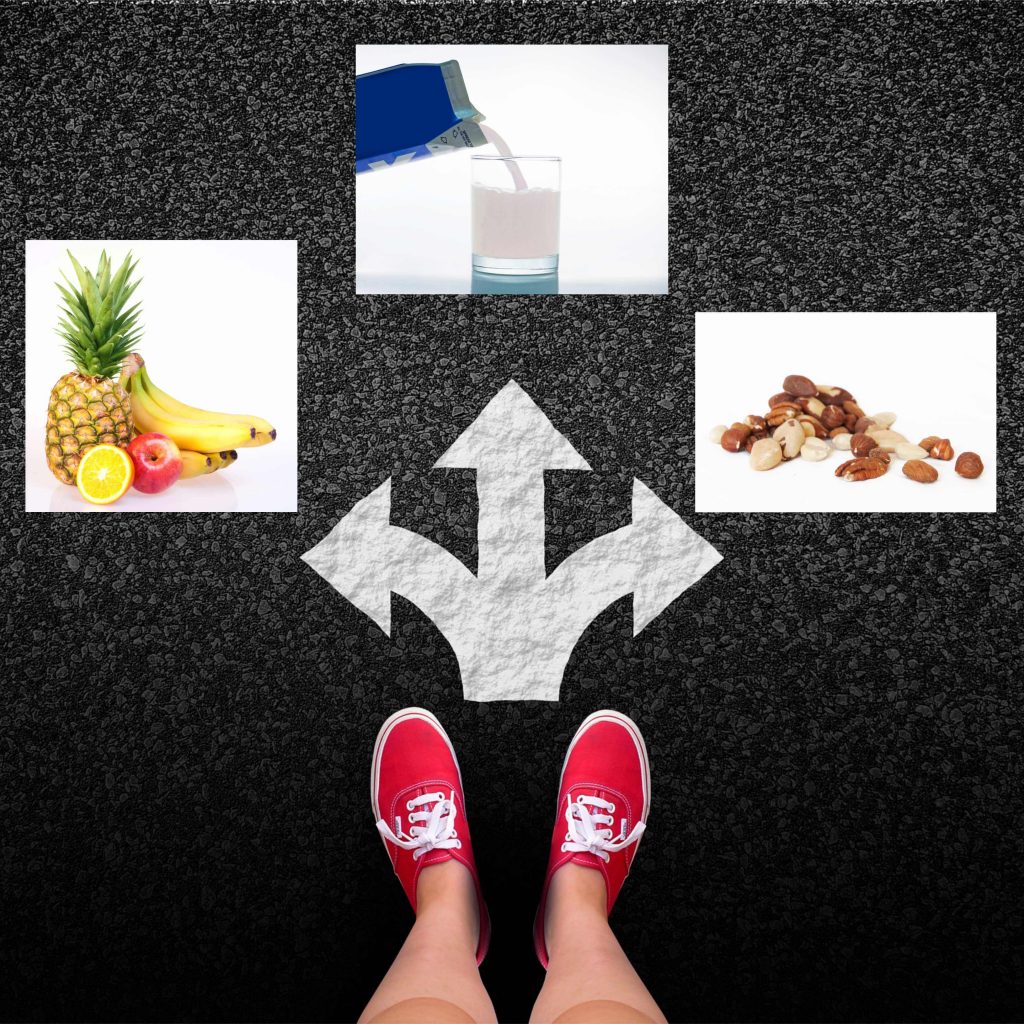 How this affects us

For people interested in the fields of health, fitness or nutrition, they become a source of obsession. For society in general, they become a source of confusion. Depending on which one is more fashionable in each instant, its basic idea is leaked through the media and suddenly everyone is repeating it without knowing well what it means: carbs are bad, fat is bad, gluten is bad, animal products are bad, snacking is bad.

People with eating disorders or prone to them, on the one hand restrict their diet even more, and on the other hand use these labels as a shield so they can protect themselves from others’ comments and justify why they eat what they eat… or don’t eat. This way, the suspicion that someone’s suffering from anorexia or orthorexia becomes “oh no, they’re just keto” = healthier than us.

The obsession with numbers

Another attitude that’s becoming more and more normalized is counting calories and macros. Something that, as a tool to learn, I think is fantastic. Having an idea of our usual daily intake and making sure we maintain a suitable balance —for us— between carbs, protein and fat can help us.

But counting and analyzing every gram in an obsessive way and, above all, having to eat every day a fixed amount… is a disorder. There comes a point when we’re no longer in control but controlled. I believe this hasn’t yet been totally normalized in society. But in the fitness world, it’s the rule rather than the exception. 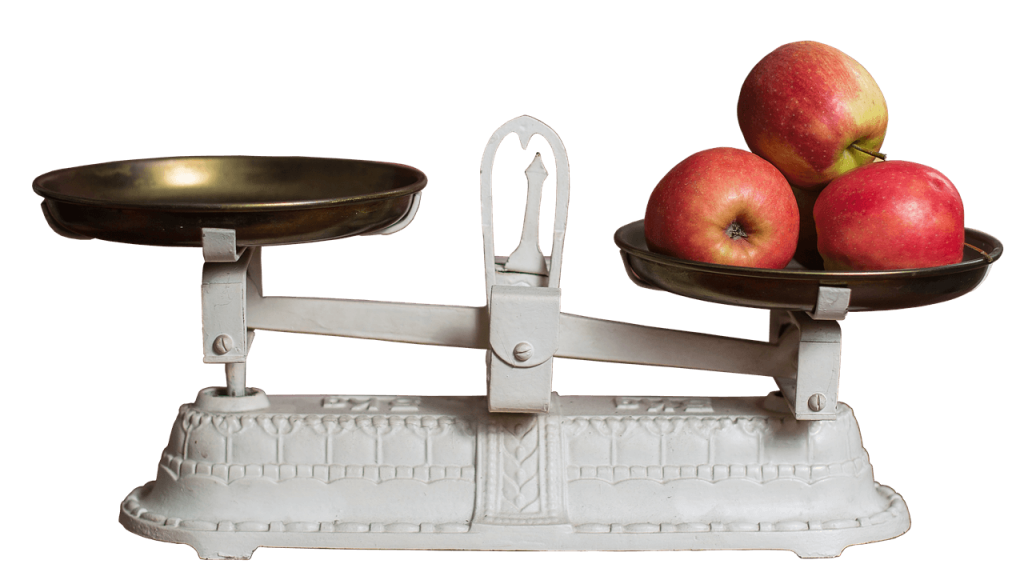 The problem is even more serious if the numbers are taken from any random website. I’ve tried several calculators, and the results have been completely different. Usually, the number of calories is too low (quite under the one I’m eating now, with which I gain very slowly). Especially for women, with huge differences from men that aren’t justified.

Moreover, a person with an eating disorder will take that number as a maximum. And someone in recovery, who’s already struggling with eating what the doctors are telling them to eat, will find it even harder to eat more than what another system is telling them to eat. With regard to the percentages of each macronutrient, it can vary enormously depending on the bias of the website.

More emphasis should be put on teaching people to know and to listen to (in my opinion, in that order) their own body. There should be a warning that the general recommendations are just a starting point for people who want to begin to pay more attention to their nutrition, and that it must be adapted. We should be promoting nutritional education so that people can make informed decisions, as well as the individualized work with professionals (coaches and trainers with proper education, nutritionists and dietists).

The perception of body types

The perception of thinness and low weight is also altered. Now some clearly underweight models don’t say like Kate Moss, “nothing tastes as good as skinny feels”, but they claim to be health leaders showing their meals and workouts (allegedly) on the internet, like saying “look how in fact we’re so healthy”. So their body type is the one that becomes linked to the one a healthy person should have. 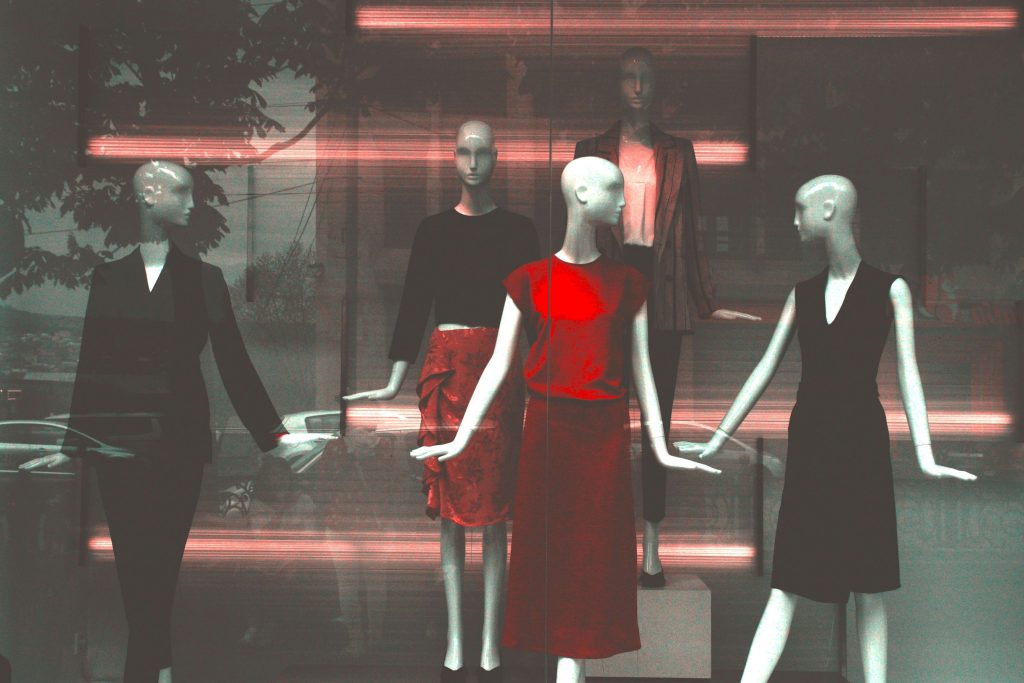 And this doesn’t only happen with celebrities: fitspiration aren’t always better than thinspiration; maybe they weight more because of their muscles, but not enough to sustain their demanding lifestyle, and many times they have health problems like amenorrhea caused by their low body fat percentage. Everything that glitters isn’t gold.

The consequences of all this

Certainly, most people aren’t going to follow to the letter all the kinds of diets I’ve described. Or maybe they do for a while to lose weight, then they get tired and stop. The crux of the matter is that the idea that this is what “healthy people” or “fit people” will become common thinking. So when someone has these behaviors, instead of making all the alarm bells go off, in their environment it will be perceived as something even positive.

That’s why we people with anorexia have to listen to comments like “I’d love to have your willpower!” when we say no to the cake in a birthday, that when we’re deep into our illness fill us with pride to keep going and, when we’re in recovery, are immensely triggering (so if I eat that means I’ve lost my willpower?).

So what do we do now that, more and more, people with restrictive eating disorders don’t have to do the things their illness tells them to in secret anymore like it used to be, but they can do them in public and get praise? Their problem only becomes evident when the weight loss is very serious. When probably they’ve already been a long time in the dark and and the physical and psychological wounds are deep. 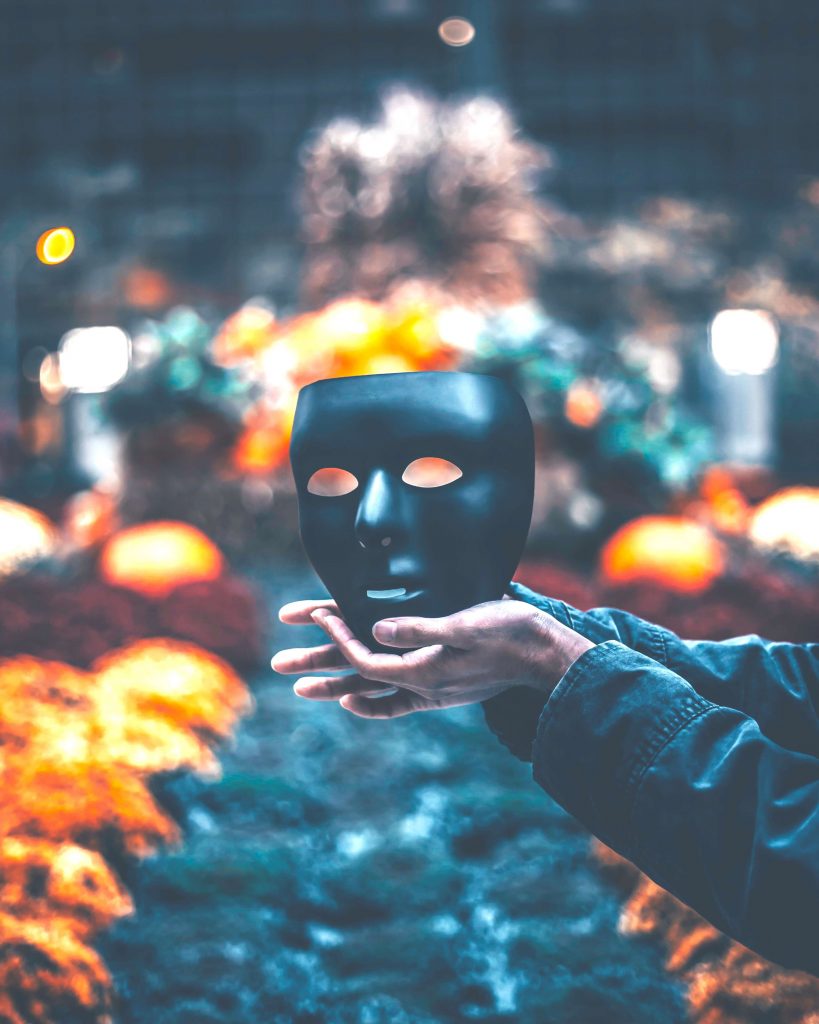 We can’t let instagram and the media convince us that sick is normal, and even less good or desirable. Apply your critical thinking to all the messages of the “diet culture”. Let’s learn to really take care of physical health, while preserving mental health! 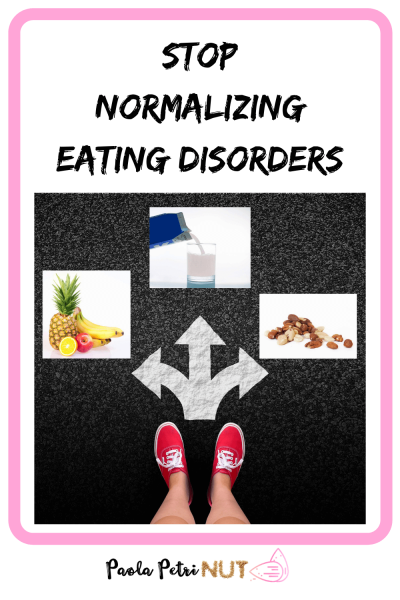 My box of fears: why I was scared of anorexia recovery
The 10 Golden, Simple Rules of a Healthy and Balanced Diet
Top 10 best healthy fitness recipes for dinner 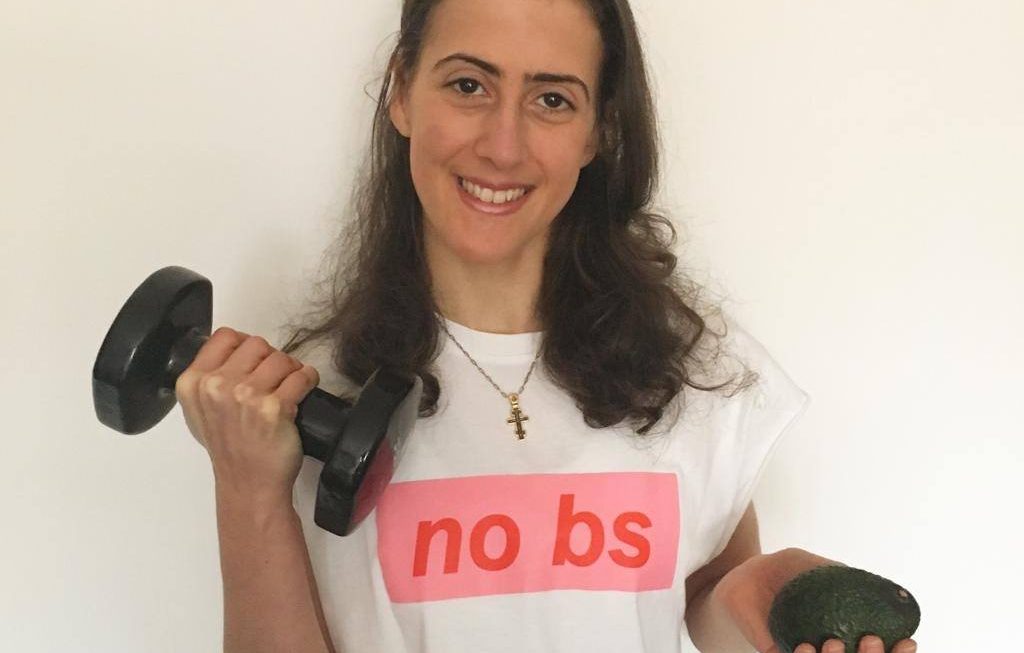